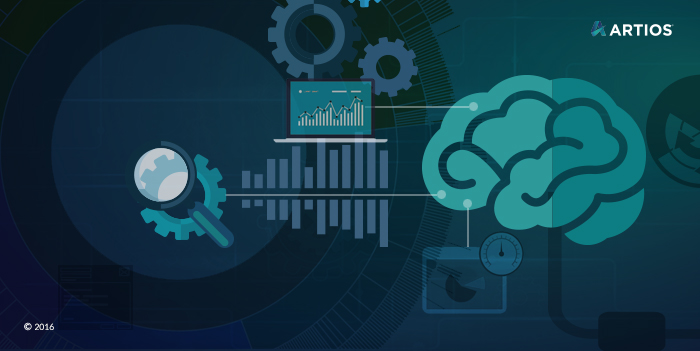 But it could be more correlation than causation; sites that possess significant brand awareness attract NoFollow links and sites that invest in content that satisfies the user query also happen to engage in advertorial campaigns.

NoFollow links predict search rank up to point. There’s a theoretical ceiling on how much of an impact they have.

The table and plots show us that it becomes increasingly hard to increase Google Rank as you increase the number of NoFollow Backlinks. 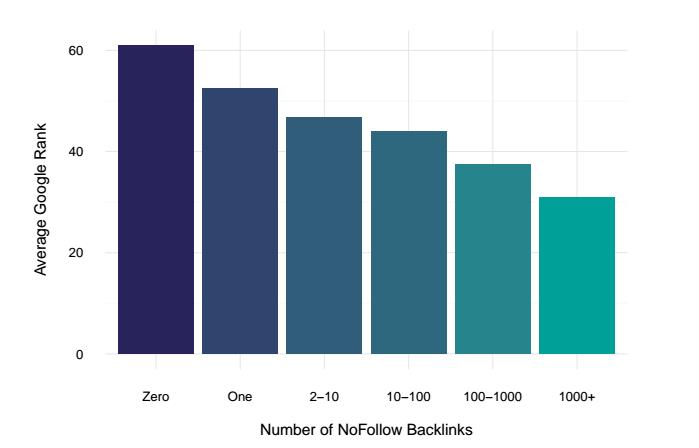 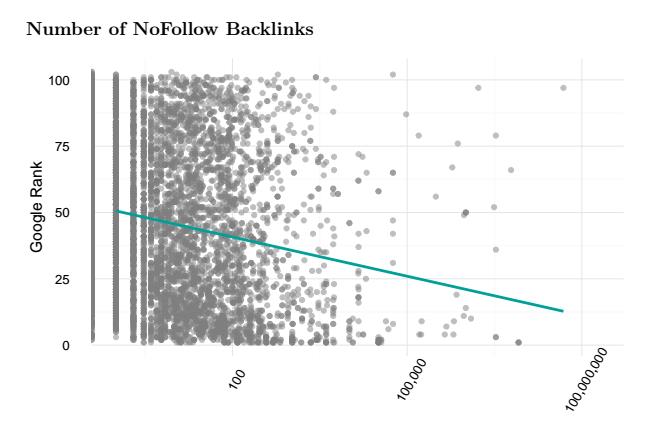 DoFollow backlinks by contrast, are the 38th most important Google ranking factor.

Andreas Voniatis, lead data scientist at Artios believes this is good news: “As an industry we’ve long been fixated with earning quality DoFollow links. Most SEO practitioners have felt a pang of disappointment after securing a great link, only to discover the rel=NoFollow tag next to their domain.
“This part of the study suggests these worries are unfounded. Variety of link type (followed and not), referring domain and link quality – essentially an extremely natural link profile – are the key to improved ranking.” 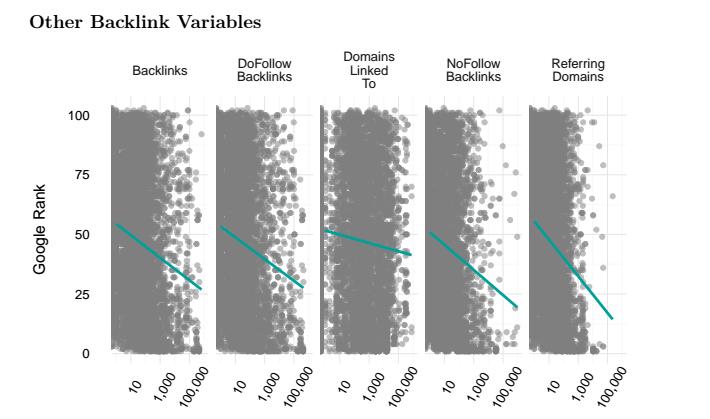 For large sites, linking out matters

In fact for every additional link, the effect on rankings is -0.00001471. This equates to approximately 100,000 links to move a ranking by 1 position. Of course you’d need a lot of content to justify amount of links.

Andreas Voniatis: “This finding is mostly relevant to content heavy sites sitting at the top of their niche, comparison sites and resource sites for example. To justify this volume of outbound links, you’d need tens of thousands, if not hundreds of thousands, of pages on your site. However, smaller sites can emulate this practice by sticking to a rule of including one outbound link per page, minimum.

“I’d personally recommend including outbound links wherever there is a claim or assertion that needs sourcing or wherever there’s an opportunity to enlighten the user further. The fear of leaking traffic should be lower now we know Google rewards the practice of linking out.”
Semantics

Emotion matters, as does ‘sense’

Using natural language processing (relying on the NLP libraries used provided by the Python programming language), we found that sites with a high probability of evoking fear in their readers have a high probability of ranking well. In our study, each word would be turned into a vector and have certain probabilities assigned to it in terms of the emotions and the sentiment they convey.

It’s also extremely important to give Google.com a strong sense of what the site is about. This isn’t achieved through keyword volume.

The wider industry claim is that search engines are less dependent on words. Our analysis bears this out. We found that pages with a high computed likelihood of ‘being about’ credit cards scored higher rankings on average than web pages that didn’t.

This isn’t the same as keyword density (percentage of copy words containing keywords) as that is just a keyword count. Concepts look at the relationship between words within the copy and a score is computed to see if the body of text is about a topic. This was also apparent in the title tags.

Andreas Voniatis: “This finding was perhaps the most interesting. As an industry we’ve known that semantics play a large part in search performance, but this is potentially the first piece of evidence to suggest Google uses emotion of language to judge a site’s usefulness.

“Google appears to be applying some degree of regulation by proxy on credit card sites. Industry regulators encourage businesses in the financial services sector to emphasise the risks of their products over the benefits. This typically results in a higher degree of fear emotion in the copy.”
Google’s lowered expectations

“SEO is a lot like elite sport. – It’s a different game entirely when you’re in the lower leagues.“ – Andreas Voniatis

Google treats high ranking (top 20 positions) differently to the bottom 80. The rules are the same, but the game is different. Similar to elite sport, small margins make a big difference at the top, but in the lower tiers, effort and hard work get you a long way. 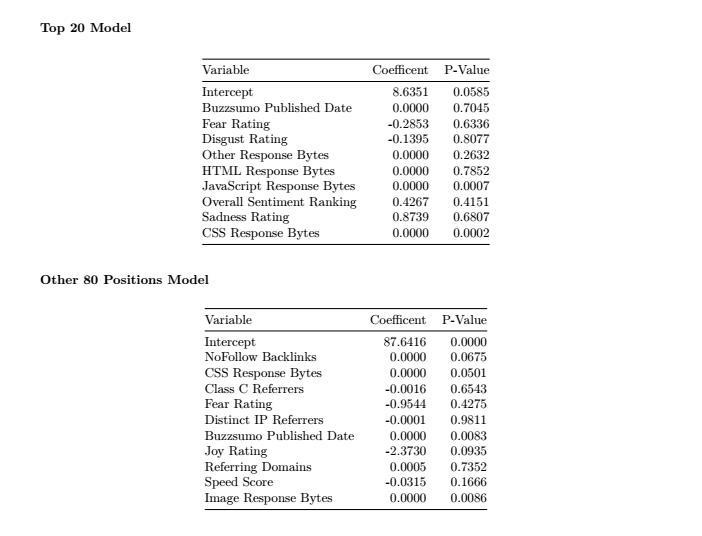 Word count – The analysis indicates that there’s no optimum word count for a web page. The number of words in the body copy simply isn’t a ranking factor. Naturally sites with thin or no copy may present related user experience issues and invoke a high bounce rate, but as far as the credit card sector goes, the sheer number of words doesn’t have an impact.

Social media – Our study found no evidence that social media metrics such as Likes, Shares, Retweets have an impact on Google.com rank.

Social media metrics had a zero R-squared value with rankings (zero means zero chance of explaining the relationship). This doesn’t mean that social media has literally no impact on search, but our analysis couldn’t find any statistical evidence.

The model shows that everybody starts from a baseline ranking of 86 and the ranking goes higher or lower depending on the ranking factors.

So for example, for every increase in AHREFs rank of the ranking domain, the higher the ranking by 0.59 ranking positions

For every increase in domain authority, we get an improvement in rankings of 0.13

creditcards.com had the largest number of high rankings averaging #6 considering their large coverage of 70 keywords, followed by nerdwallet.com

Mypremiercreditcard.com had the highest average ranking of 3.6 although they only represented 14% of the dataset

Andreas Voniatis summarised: “The tactics used by top flight brands will be very different to start up sites with less inbound linked content by comparison. According to the stats, those starting afresh will need to focus heavily on building authority.”