Why SEO agencies really get fired

If you want to make it past month 6 with a new client, you need to be transparent and open about your methods, especially with clients of a smaller size.

That’s according to research by Artios, a London-based artificial intelligence search analytics agency, who crunched the numbers and dug out the top reasons businesses part ways with their SEO agencies.

A study of more than 500 business from around the world, who have worked with an external SEO supplier in the past three years, found: 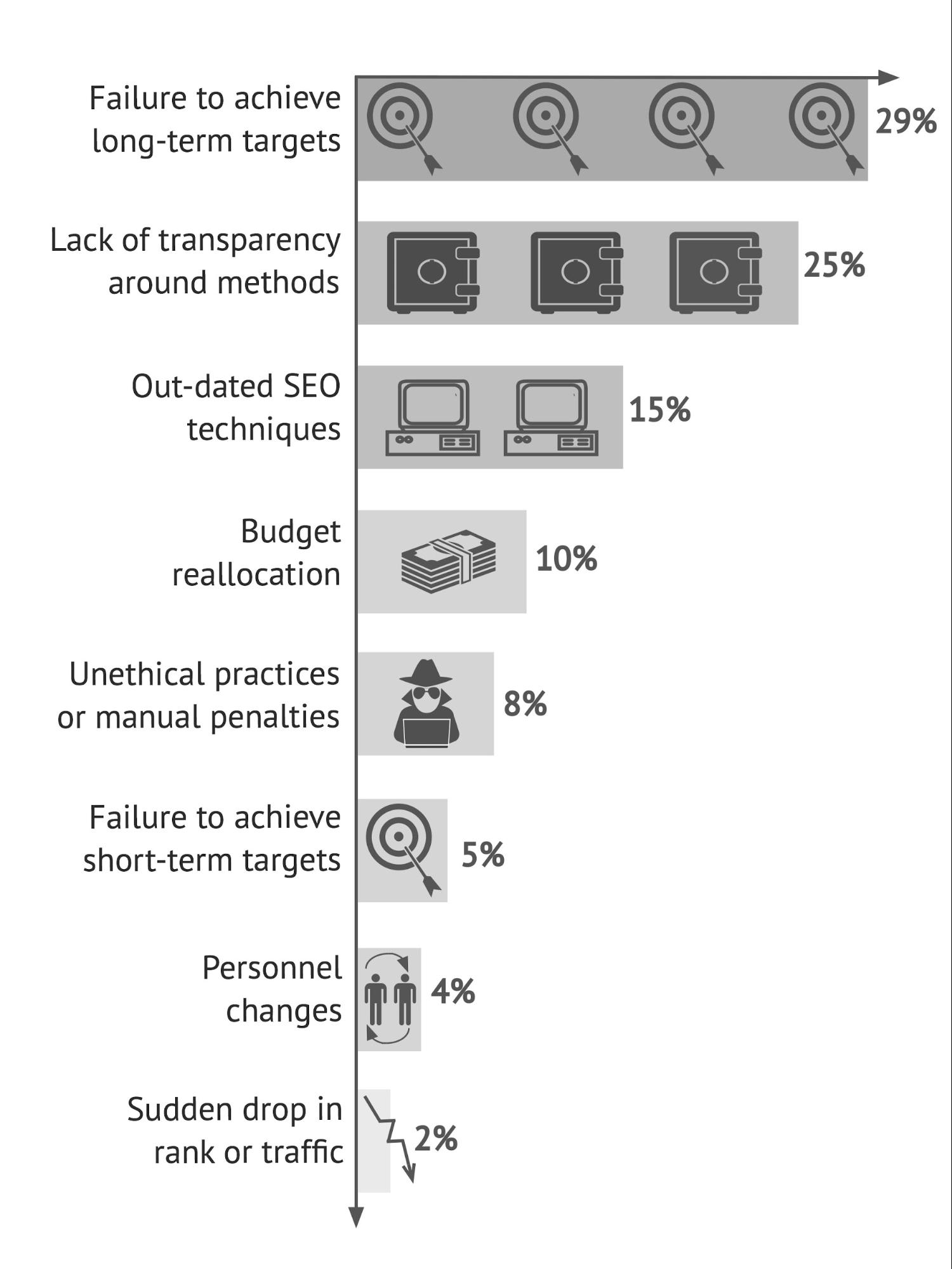 Traditional complaints such as unethical SEO techniques and failure to meet targets still factor prominently among the top reasons for terminations, but agencies are getting dropped in increasing numbers – and sooner – due to supplier-side secrecy.

In fact, a lack of transparency account for more early (first six months) terminations than any other factor.

Client size has an impact on cause of termination. Smaller clients appear to be less tolerant of secrecy and more likely to terminate early.

The larger a client, the more likely they are to rely on longer term targets. Larger clients are also less likely to terminate a supplier earlier on in the contract for lack of transparency.

Unethical practice is most likely to get you dropped during the 7-12 month period, suggesting less scrupulous agencies are taking advantage of the ‘honeymoon period’ of their new contract to earn ‘quick wins’.

It’s not all about bad-blood though. ‘Friendly terminations’ such as personnel changes on the client’s side, budget reallocation and agencies delivering on a specific brief account for 16% of all agency-client partings of ways, but are most common among companies with 100 or more employees.

Most common reasons for firing an SEO agency, by contract period

Most common reasons for firing an SEO agency, by client size

Most common reasons for firing an SEO agency, in total

Jonny Challenger, founder of fashion discovery website Stylecompare.co.uk, revealed that despite promising early signs, trust with the agency he hired in 2014 quickly faded due to secrecy and a lack of transparency.

“We engaged external SEO resource to assist with a major update of Style Compare. Our in-house team were working flat out and we needed extra hands on deck.

“The pitch was slick, the case studies were impressive and we gelled with the account team, so we engaged the agency on a 12-month contract with a break clause at three months. The break clause was actually something the agency proposed, presumably as a reassurance piece.

“We weren’t expecting big movement in the first three months and as a client, we’re naturally very patient. However, we struggled to get any guidance from the supplier on their strategy in month one and by the middle of month two they became somewhat evasive. Our in-house team wanted to understand what benchmarks were being used, what competitors had been identified and how we were planning to compete.

“The lack of visibility caused friction and broke down the trust we’d built during the pitching process, so we gave notice in month two that we didn’t wish to renew. It’s the first time we’ve ended a supplier relationship within six months.

“I suspect in all honesty that the supplier was under-resourced and shouldn’t have bid.”

“We’d always expect to see complaints like unethical link-building and unrecovered drops in ranking leading to terminations, but our research suggests that clients are now demanding transparency from their agencies from day one.

“Given the damage a badly executed SEO campaign can do to a business and the waste it can lead to, it’s understandable that businesses are now keen to understand how their agencies are working. Too many agencies treat their approach as a ‘secret recipe’ that must not be revealed. This just leads to a lack of trust.

“SEO operates in a very data rich environment. With the increasing availability of cloud computing and AI, there is no excuse for SEOs to engage in secrecy and instead they should embrace the opportunities of AI in communicating their knowledge to their clients. SEO industry should be prepared to have their recommendations and practices open to transparency and justified by statistics, moving away from quick wins and tricks that merely give the impression of progress.”