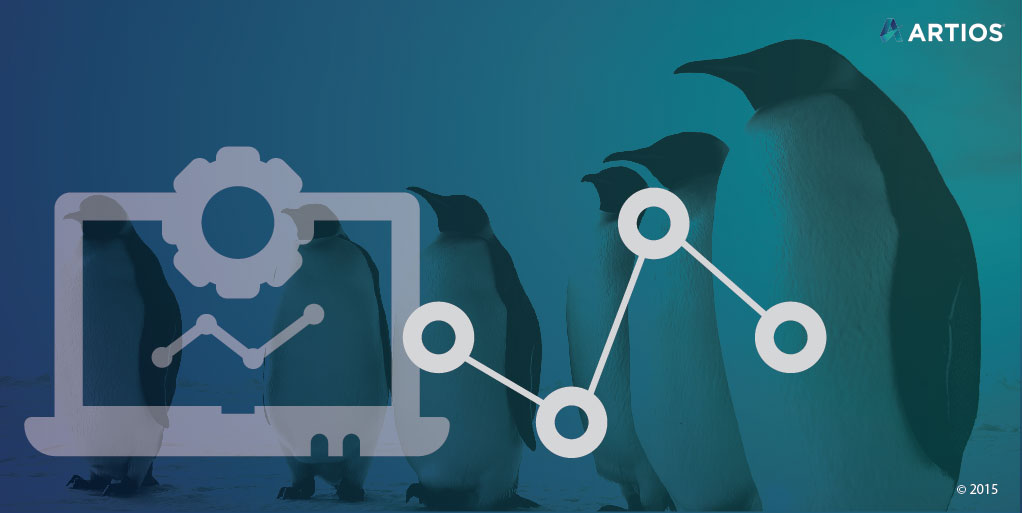 Google’s Penguin 2.0 algorithm was rolled out during May 2013. MathSight, a company that Andreas Voniatis helped found attempted to deconstruct the algorithmic update using deductive mathematical reasoning.  In layperson’s terms what the once secret ingredients were.

According to the data, MathSight found that Penguin 2.0 and 2.1 was targeting the reading age or readability levels of website content.  The findings were of statistical significance such that readability proved to have a treatment effect for sites that gained and lost traffic as a result of the algorithm updates.

The difference between Penguin 2.0 and 2.1 was  highlighted by the data asa  change in the weighting of the algorithm “ingredients” such that 2.1 had a greater emphasis towards the reading metrics used in Flesch Kincaid Reading Ease and away from Dale Chall.

Artios has since proved that reading age is specific to the market sector.  For example, sites wishing to succeed in SEO for wedding planning searches will require a vastly different reading age to LED light bulbs.

The original MathSight data science study has been reproduced below:

This essay identifies how shifts in traffic sourced by Google’s search engine can be related to the structural and content-based features of a company’s web pages.

We decided to apply our machine learning led predictive SEO models to deconstruct the Google Penguin 2.0 algorithm update, rolled out on 19th May 2013.

Although it is near impossible to reverse engineer a complete search engine algorithm such as Google’s, it is possible to show the potential causes of any  change in algorithm methods when it occurs. We look for  a step change in a pattern that could be an underlying increase or decrease in actual Google-sourced traffic as a result of an algorithm alteration, such as the recent Penguin 2.0 update.

Once the Google search traffic dataset for our chosen group of web domains had been obtained from website analytics, de-seasonalised and filtered, the first step in the reverse engineering process  was to confirm that a change in traffic did indeed take place. This was done using signal processing techniques, a best practice in the oil and gas exploration industry, to detect the likely point of change in the noisy data.

Following this, we gathered a wide range of standard SEO features from the pages (title character length, number of meta description words, readability and so on) within the domain. Finally we applied a variety of statistical methods to identify those features that were rewarded or penalised in terms of their Google search traffic after the likely algorithm update time.

Our results showed, with some statistical confidence of around 90-95%, that the main areas within HTML that Google has probably targeted with this change were:

Websites from eight business categories as follows were used for the purposes of this study, in order to create a well-rounded dataset:

HTML file contents were first gathered by our in-house web crawler, which scanned the sites in-depth, for structural and content-based ‘features’.

Daily website analytics (page view) data was also imported for each domain above, spanning a two-month period, from 11 April 2013 through to 11 June 2013.  This period afforded a reasonable  window around the time that Google had announced the ‘Penguin 2.0’ algorithm update.

Following this confirmation that a change had indeed occurred, all the html pages of the chosen domains were classified as either ‘winner’ or ‘loser’ pages with respect to their mean traffic levels pre- or post- the alleged algorithm update. The traffic values were normalised, i.e. adjusted so that difference between ‘before’ and ‘after’ algorithm change traffic level were scaled correctly.

Then, the effect of html page features on traffic difference was analysed using the Analysis of Variance (ANOVA) method. This enabled us to see if there was any statistically significant relationship between feature metrics and daily search traffic variation.

For smaller websites (i.e. 1,000 uniques per month or less from Google), we found that the average visitor traffic before 19th May was 33.97 per day, while afterwards it was up to 59.66 per day (an increase of 56.31%). There was a clear confirmation statistically that a change in traffic took place.

Firstly, Google’s algorithm seemed to have become attentive to the nature of the title tags in their html pages; as this seems to have had an effect on the traffic level after the change. These aspects were found to be significant, shown here in order of importance:

Secondly, the nature of overall html body text has had an impact; in this order:

These were rewarded in the following fashion:

Thirdly, but notably less significantly, the following two features had some influence:

For websites with much higher traffic volumes, and many more pages, similarities between this website and lower traffic sites quickly became apparent, such that there seemed to be a focus on the overall html page body text content, meta -descriptions as well as hyperlinks.

That is to say;

However, the difference here was that there was no hint of title length or content being significant.  Rather, there was also a focus on two other areas (listed in order of importance):

Thanks to the increased dataset for this client, by comparing pages that ‘won’ post algorithm change with those that lost, we were able to observe that some features were quite substantially rewarded as they increased in value; whilst others were punished. See below:

Sites with extensive online catalogue with product photographs which won as a result of the update showed certain significant features that emerged:

Additionally, the following features were significant:

In terms of rewarded and / or punished features – with this client a large quantity of anchor text (regardless of whether duplicate words or not) was heavily rewarded.

As was the ‘reading ease level’ of the body text and headers (i.e. the harder/ more complex it was, the better it was to Google’s algorithm). This relates to the number of rare words. The full breakdown is shown in the following graph.

Our analysis suggests that there is perhaps significant, positive association between a site’s search traffic sourced visitor levels, augmenting the values of certain features and reducing the values of others, based on two months’ worth of traffic data (observed 10 days, one month and 6 weeks before and after the change).

Overall, there was a large variation between the types of rewarded features for the different websites analysed. This would suggest that any advice given would be most effective if tailored to the individual domain, or type of domain if domains can be grouped or clustered into types.

However, even with all the above variation – looking at the two larger and more popular (traffic-wise) sites that clearly exhibited effects of Penguin 2.0, we can draw the following conclusions: 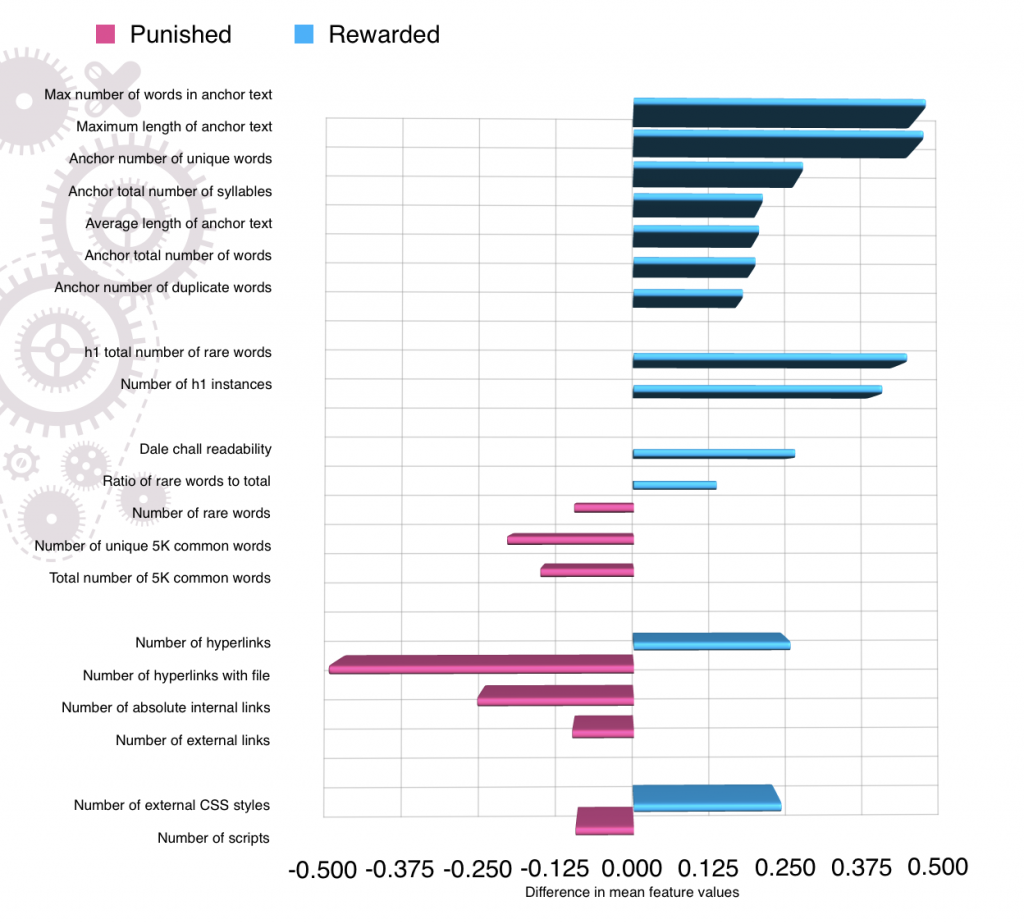 In addition to the insights gained on deconstructing Penguin 2.0, we can now use the models to evaluate the inbound link  profiles of sites that may have been affected by the latest algorithm update.  For example, the models may be applied to a site’s inbound link  profile when trying to decide which links to disavow  when faced with  a search engine manual penalty notice (ie apparent abnormal inbound link activity), or subsequent loss of traffic in response to a search engine’s algorithm update.